June 10, 2012
If a word from one language takes on a racist meaning when translated into a different language, is that term racist in itself?

Does the racism come from it's meaning and us in the source language or in the translation? Or is this an unfair comparison?

Lately, these questions have been on my mind. Last night I attended Archie Shepp's performance at the World Sacred Music Festival in Fes. While he was being introduced in Arabic, the presenter referred to his music's connection with the جماعة الزنوج jama3at al-zunuj. I've only known zunuj as a derogatory epithet for Africans which most politely translates to "Negroes."

I was taken aback when I heard this.

If the speaker had been speaking in English and had used those precise terms, I'm sure I would have heard gasps and murmurs at such inappropriate language. But the concert's Arabic speaking audience didn't seem to notice.

And neither did the Festival's organizers when they ostensibly wrote that text, nor did the editor who read it. It's also worth noting that in the English text, the phrase "Negro community" was not included. Rather, the speaker referenced America's historically "enslaved peoples."

I had always considered زنج zinj, the singular of زنوج zunuj, to be racist. I remember first encountering during my studies at Rice. My undergraduate adviser told me, "If you go to the Arab World, don't go around saying this. It will get you in trouble."

To show you he meant, I typed زنجي zinji, the word's adjectival form, into Google Translate, and here are the results I got: 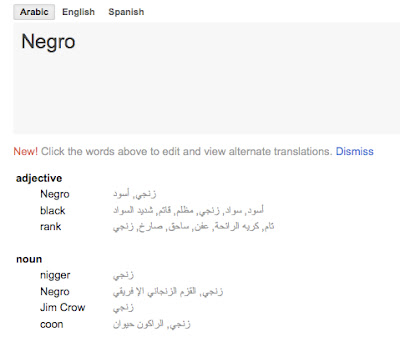 If a major American festival were to introduce a Black performer using any of the words zinji translates into in English, it would be news. There would be outrage. But at the World Sacred Music Festival it went unnoticed.

My recent encounter with zunuj remind us that languages are more than words, grammar and syntax. They convey ideas, all of the ideas humans can articulate verbally as a matter of fact. And so, translation is not merely exchange one word for another between languages, but rather an exchange of concepts which carry values along with meanings. This is a type of cultural exchange which can cause problems.

The questions isn't whether the Festival's organizers are racist or insensitive because they used zunuj; that's not an appropriate way to look at it. Rather, we need to investigate zunuj's place within Arabic. The issue is not necessarily what zinji means in English, but it's meaning in Arabic and from there we can determine its appropriateness in such a context.

According to Lisan al-Arab, zinj and zunuj refers to the inhabitants of Sudan. It's use is compared to the words رومي rumi and فارسي farsi which acceptably refer to Europeans (Romans) and Persians, respectively. So it in a purely lexical sense the word doesn't appear to have a pejorative meaning. However, though Lisan al-Arab is authorative, it's from the 13th Century.

A more up-to-date reference, Lane's An Arabic-English Lexicon from the 1860s, echoes Lisan al-Arab saying the term refers to "a certain nation of the Blacks." Hans Wehr's A Dictionary of Modern Written Arabic, first published in 1979, translates zinji as "Negro."

Here's where it gets sticky, though. Social mores are constantly changing, and terms that were acceptable decades ago, let alone centuries, are no longer 'politically correct.' Remember, 'Negro' used to be the nice way to refer to African Americans.

But social mores are also culturally specific. 'Political correctness' itself is uniquely American and Western. As we saw above, Arabs have tended to label 'peoples' based on their ethnicity, and do so rather frankly. And though all but one Arab country acknowledge 'Universal Human Rights', we have to remember that those rights emerged from a distinctly Modern and Western context. So while such 'ethnic profiling' may be ignominious in America, in the Arab World it may be value neutral.

Last night, as I pondered this issue, I couldn't shake my professor's admonition of zunuj. If such learned, experience scholar felt that way about the word, then I couldn't accept the possibility that it is truly appropriate to use. So I decided to ask some of my Moroccan friends if they feel zunuj is racist.

A former Arabic teacher of mine said that it is no problem. He fell in line with Lisan al-Arab and the principle of naming 'peoples' based on their ethnicity. However, a university friend of mine shared my shock and embarrassment. He said that using zinji is the same as using 3azzi, the derogatory term for 'black person' in Moroccan Arabic.

Obviously, 3zzi is not the word that was used, but is it fair to say the zinji and zunuj are equivalent in meaning? It's hard to say for certain, especially if Moroccans themselves can't agree on whether zinji is inappropriate. Clearly zunuj can be seen as appropriate if someone got up on stage at a major festival and used it in front of an audience and television cameras.

Regardless, there are other terms that could have been used. The word السود al-sud, means "Blacks" and is found in scholarly texts and in newspapers.

However, as my friend said to me, I have to acknowledge my perspective as an American. He echoed what we saw above, that social mores are shaped by the particular cultural circumstances from which they emerge. He told me that the racism I perceive in words like zinj is a product of slavery and American history. So an Arab, with a different heritage and a different concept of racism, may view the term completely differently.

Maybe it's unfair for me to judge its usage in such a way. And certainly a festival which features artists from around the world and of a variety of ethnicities and whose goal is the "reconciliation among peoples and cultures", would use zunuj in only it's most formal, literal, value neutral sense.

But it didn't feel right.