July 11, 2020
For centuries, Muslims from North Africa traveled overland in caravans to perform the annual ḥajj pilgrimage, one of Islam's five pillars. Many of these journeys are documented in ḥajj diaries. These diaries detail the trials and triumphs of these voyages in vivid detail.

In this episode, Aḥmad describes his and his companions meeting with a certain Abū Turkiya, a student of his father's. Their meeting outside of Tripoli, Libya, is overflowing with love and affection, a demonstration the powerful bonds forged by pilgrims and the communities they traveled through en route to the ḥajj:

"As we approached [Abū Turkiya’s] house during our ḥajj in 1096/1685, he came out to meet us, swaying, carried between two men, his feet dragging on the ground. We dismounted and greeted him with an embrace. He said to me, 'You are sayyidī Aḥmad b. Maḥammad b. Nāṣir.' He repeated that many times, and then after speaking for some time he began to repeat it again and again. Every time he said that to me, I responded, 'Yes, sayyidī.' He embraced me and said, 'Welcome! Welcome!' A great joy and happiness came over him, the likes of which I did not encounter from anyone else whom we passed by in the countryside or city. Throughout all of this he kept saying, 'Praise and thanks be to God, this is a day of celebration!' He did his utmost to pray for us. He took me by the hand and led me to a masjid by the door of his house, which he had built. He sat with us [there] and called for food to be brought. He presented [us] with bread and exquisite grapes that satisfied those who were present. We walked together for about a mile, which was amazing considering [that previously] he could not walk on his own. Yet, when we walked together, he was able to do so. God knows best, but this was only due to the love that flowed through him.

He then came to us between sunset and the beginning of Maghrib prayer when we were back with our caravan. Before him was a man carrying a large platter, while he rode a donkey that was led by another man. We stood to greet him and he said, 'This is what you will break your fast with,' speaking to me, '[I noticed] you were fasting and did not eat with everyone else at my home.' The platter was set on the ground. It contained a stew (tharīd), meat and a large bunch of the most delectable, delicious grapes. [Abū Turkiya] said to me, 'Eat! And order your companions to eat!' So we and our companions sat and we began to eat. As we ate he called to us, 'Eat! Whoever eats this food of mine will find blessing, God willing.' Someone [among us] who claimed to love my father, the shaykh, may God be pleased with him, said: 'O sayyidī! Pray for me, for indeed I loved sayyidī Mahammad b. Nāṣir.' [Abū Turkiya] looked at him and said, 'It is difficult to love the ashyākh, few are able to do it.' [At that, the man] turned away from him. We considered this to be one of [Abū Turkiya’s] miracles." 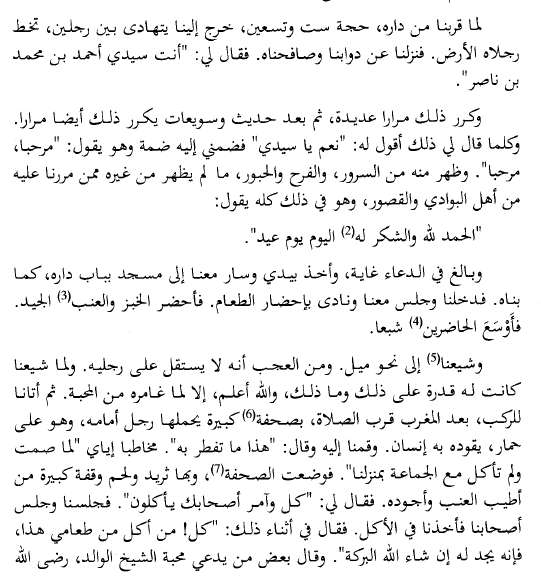